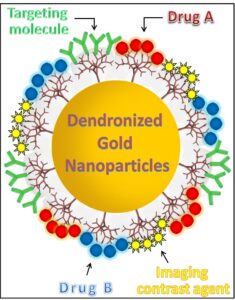 Our new type of nanocarriers is based on a unique modular platform designed to integrate every characteristic of an ideal drug delivery system. This novel platform possesses two main avantages over already existing delivery systems. First, its design supports the creation of an all-in-one delivery system, displaying active targeting and imaging capabilities, as well as releasing a very large payload (up to several thousands of drugs) of several types of therapeutics simultaneously and in a controlled manner. Second, this platform endows the nanocarriers with great versatility, so that they can be easily adapted for use in the treatment of a variety of diseases.

Cancer chemotherapy represents the main area in which these drug nanocarriers are expected to have a tremendous effect. By dramatically reducing side effects and optimizing the therapeutic effect of drugs, they should ideally lead to the potential eradication of many challenging cancers. Consequently, the projects in my group concern multifunctional nanocarriers for cancer chemotherapy, in particular for pancreatic cancer and for hormone-refractory prostate cancer. These two types of cancer are considered very aggressive, and to date, incurable.

Specifically, our group has designed a highly stable, dendronized gold nanoparticle (AuNP)-based drug delivery platform, using a novel poly(propyleneimine) (PPI) dendron. The prepared dendronized AuNPs are able to withstand several rounds of lyophilization cycles with no sign of aggregation, are stable in phosphate-buffered saline and Hanks’ buffer as well as in serum, and are resistant to degradation by glutathione exchange reactions. This nanocarrier platform displays a dense coating,
with >1400 dendrons/AuNPs, which will enable very high payload. Furthermore, while amine-terminated AuNPs expectedly showed cytotoxicity against the MCF-7 breast cancer cell line from a NP concentration of 1 nM, the mixed monolayer AuNPs (coated with 40/60 amine/carboxylate dendrons) interestingly did not exhibit any sign of toxicity at concentrations as high as
15 nM, similar to the carboxylate-terminated AuNPs. These dendronized AuNPs address the current practical need for a stable NP-based drug delivery platform which is scalable and easily conjugatable, has long-term stability in solution, and can be conveniently formulated as a powder and redispersed in desired buffer or serum. 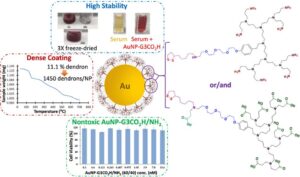 Our exciting preliminary results should lead to the development of a variety of multifunctional drug nanocarriers, in particular combining several types of chemotherapeutic drugs on the same system. This concept of combination chemotherapy with control over drug ratios is believed to be a promising avenue by a growing number of researchers in the field.

Hyperthermia for enhanced delivery of nanoparticles to tumors 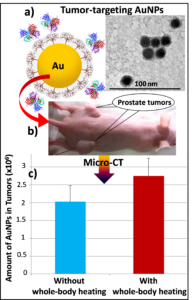 Advancements in nanotechnology have revolutionized cancer treatment by conjugating therapeutic drugs onto nanocarriers for targeted delivery into tumors while reducing systemic toxicity. However, successful nanostructure transport from tumor capillaries to tumor interstitial space and diffusion to the entire tumor region are still difficult to achieve, largely due to the large flow resistance caused by small pores in the capillary and high interstitial pressure in tumors. Previous studies have strongly suggested that hyperthermia would be a viable approach to overcome these two barriers. In this funded NSF grand, we have performed in vivo experimental studies to evaluate the effects of whole body and local mild hyperthermia on the deposition of nanoparticles in prostate tumors implanted in mice, and to measure body and tumor temperatures, tumor interstitial pressure, and local blood perfusion rates during experiments. MicroCT imaging was used to scan all the tumors resected after the experiments to determine both the 3-D nanoparticle distribution and the total amount of nanoparticle deposition in tumors.

Recent preliminary work by our multidisciplinary team suggests that AuNPs can be functionalized with Fab fragments to target prostate tumors (generated from the PC3 cell line). Therefore, we envision that this noninvasive approach will provide targeted focal energy deposition and effective pressure in deep-seated tumors, as well as lower cavitation threshold, for reduced sonication power. Critical to our premise is that effective protocols for the treatment of metastasis have remained elusive. Metastasis remains a leading cause of cancer deaths, yet most studies use focal HIFU protocols for treating and evaluating localized prostate cancer. Our preliminary work using antibody-coated quantum dots demonstrated that injection of these particles into the mouse tail vein could selectively target receptors present on xenografts (generated from the HPET cancer stem cell line [derived from a high grade human prostate cancer (PCa) biopsy specimen]) implanted under the kidney capsule. This approach provides proof-of-principle that blood-born particles can target deep-seated tumor tissue, and potentially metastasizing cells and/or metastatic lesions.

Our long-term goal is to contribute toward the development of highly effective NPs-mediated HIFU ablation procedures and expand their range to include targeted imaging and treatment of both deep-seated tumors and metastatic sites. The overall objective is to achieve focused ablation at reduced HIFU power levels using functionalized NPs-enhanced energy deposition. The central hypothesis is that HIFU ablation using systemically introduced functionalized NPs will increase precision targeting of localized tumors and enable uniform heat deposition in the target area, allowing for large volumes of cell necrosis at relatively low powers. Furthermore, it could facilitate targeting of metastasizing PCa cells and/or lesions. 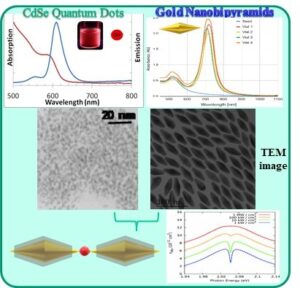 The goal of this collaborative project between the Pelton and Daniel research groups is to couple metal nanoparticles to semiconductor nanoparticles to modify the properties of the individual component particles.  The coupling of nanoparticles has been used to enhance scattering, fluorescence, and absorption, leading to applications in sensing, photocatalysis, and light harvesting.  However, the exact properties that emerge are highly dependent on the precise arrangement and number of the coupled nanoparticles, and creating uniform, discrete assemblies remains a challenge.  In particular, the coupling of plasmonic and excitonic nanoparticles has untapped potential if strong coupling between their respective plasmons and excitons can be reliably achieved.  Novel properties, for example Fano interference and Rabi splitting, are expected to arise when these particles are strongly coupled.  But coupling strength is especially dependent on the precise position of the component particles.  Nevertheless, a system composed of a single emitter quantum dot strongly coupled to plasmonic nanoparticles would have widespread applications in photonics, optics, and information processing, making such a system desirable.

To this end, Pelton and Daniel are investigating the assembly and optical properties of gold nanoparticles-CdSe/CdS quantum dots conjugates.  The Daniel’s lab has linked excitonic nanoparticles (CdSe/CdS quantum dots) to gold nanoparticles through covalent bonds.  Strong plasmon-exciton coupling was achieved between a single CdSe/CdS quantum dot and the gap plasmon formed between a gold nanosphere and a silver film, providing the first definitive evidence of strong coupling between a single emitter and a gap plasmon.  This study revealed that the yield of strongly coupled particles was limited by the geometry of nanospheres.  To address this, a method was developed to sharpen gold nanorods post-synthesis by etching them with cysteamine.  The sharpened tips of these nanorods provide the local geometry that was observed to be necessary to obtain strong coupling.  The Daniel’s lab has also recently started investigating the use of gold nanobipyramids for the linking of a single quantum dot at its tip. The work described here demonstrates the wide-ranging applications of inorganic nanoparticle assemblies, from bio-detection to photonics, and represents a major step towards the development of usable materials using strongly coupled plasmonic and excitonic nanoparticles.